I had the most frightening dream. The walls were closing in and I was hopelessly trapped. A storm rolled in, the rain poured, and I had no shelter or protection. The water was rising and I was drowning. Suffocating, freezing and choking, I desperately clung on, hoping against hope for a miracle, for someone to come and save me.

Just as I resigned myself to fate, a hand reached out, grabbed me by the wrist, and pulled me from the wreckage. At that moment, overwhelmed by the struggle and overcome with emotion, I blacked out.

When I woke up, the storm had evaporated, the sun shone brightly in the sky, and I was safe in my own bed. It was the start of summer.

But I couldn’t help wondering: was it really a dream? It felt so real… END_OF_DOCUMENT_TOKEN_TO_BE_REPLACED

The sun comes out

Come up from underground

– Yellowcard, The Hurt Is Gone

We all need a mental health day sometimes. But what if the whole country could have one at the same time?

Allow me to propose a new public holiday for New Zealand.

I’ve noticed people around me seem a bit down this week. Work colleagues are visibly unhappy, even the usually bubbly ones. My flatmates tell me the situation is the same in their offices. I’ve been way off-colour myself.

This got me thinking: Is there something in the water that’s making the whole town upset? Am I generalising from myself with a heaping dose of confirmation bias? Have I just been unlucky with a small sample size? Or is Wellington just feeling flat right now?

I hit up r/Wellington to take the pulse of the community. The response was overwhelming.

I got 39 replies in 24 hours. Not quite r/AskReddit levels of “RIP my inbox”, but strong for a modest community like ours.

Many culprits were suggested for the citywide gloom. Many workplaces were complained about. We even considered calling in Wellington Paranormal. But several commenters pointed to another cause – one that runs wider than any workplace.

At 41° south, Wellington doesn’t get a whole lot of sun between May and August. This (somehow or other; reports vary) leads to the well-documented phenomenon known as Seasonal Affective Disorder, or SAD. Not everyone experiences it – some of my colleagues are still delightful rays of sunshine! But it’s common enough that it could plausibly bring down a large proportion of the city’s office workers.

Whatever the cause, mid-to-late August is the worst time of year for it – we’ve suffered for a while, tempers are starting to fray, and the end isn’t quite in sight yet. And as it stands, there’s no public holidays for two months either side. What better time to give everyone a day off?

How does one celebrate National Mental Health Day? As the commenter above suggested, it’s simple: Just do whatever you’d do if you took a day off work! Relax, socialise, create – whatever (healthy) activity brings you joy and gets you ready to face the world again.

And while you’re doing that, spare a thought for those of us for whom “mental health” means so much more. A National Mental Health Day would be the perfect conversation starter for New Zealand’s mental health crisis.

Awareness events come and go, websites are easily forgotten, but a public holiday would give the issue a permanent place in our consciousness.

Tell me you’re not thinking about Labour Day already. It’s still two months away! We could give mental health the same recognition as the 40-hour work week. Wouldn’t that be amazing? 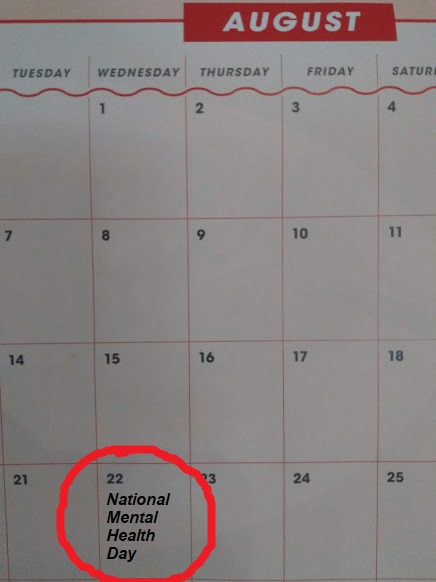 To bridge that pesky gap between public holidays.

To blunt the impact of SAD.

To recharge for the final stretch of winter.

And to get people talking about mental health.

And in the meantime, fellow kiwis: Hang on till the hurt (of SAD) is gone.

Change comes for you

Even if you’re hiding out

So wake to this truth

And maybe you’ll believe me now